Subscribe
Home » Blog » The September 2016 Issue of The Maine Sportsman 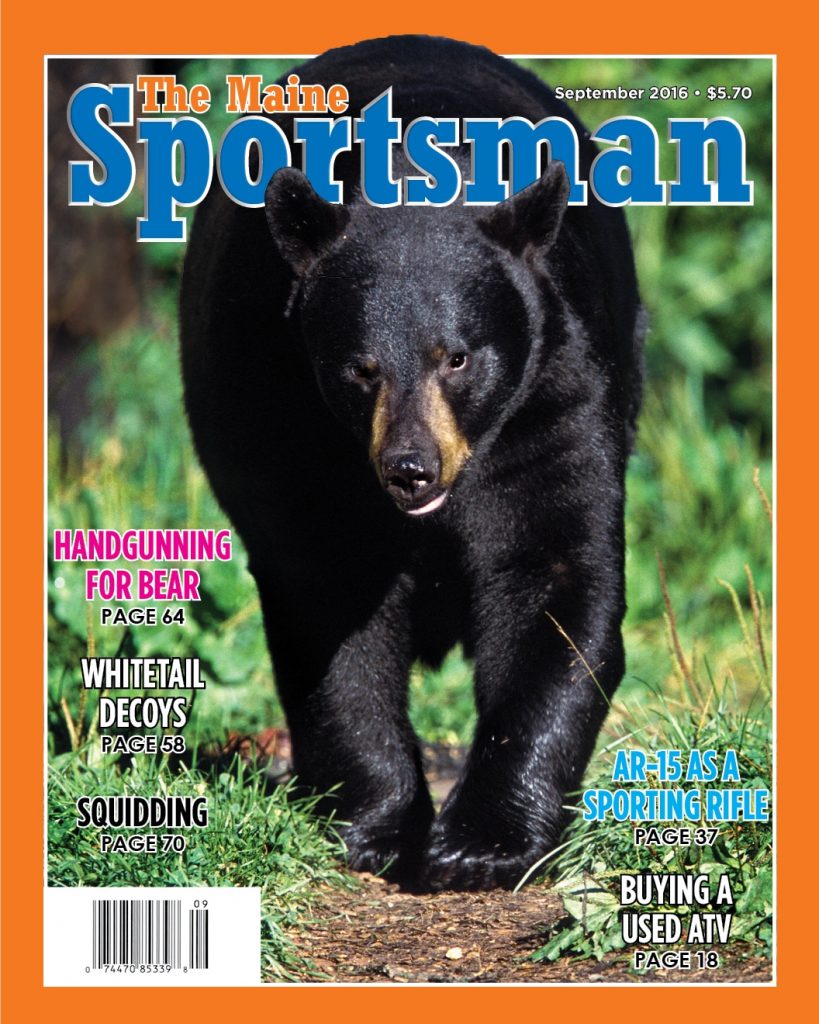 A Big Bear on the Cover, and it’s Comin At Ya! 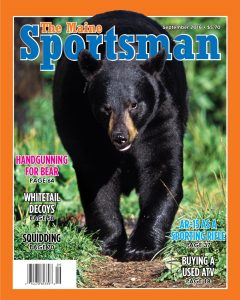 In celebration, the cover photo of The Maine Sportsman’s September, 2016 issue shows the largest bear you’ll ever see, and it’s walking down a narrow footpath, right in your direction – a scene that’s bound to grab your immediate and undivided attention.

Not satisfied to sight down a long-barreled rifle at a big bruin, “The County’s” Bill Graves describes how to take down a black bear with a pistol – but not just any pistol; rather, it’s a 7mm-08, single shot Thompson Contender “hand cannon” that proved its mettle for Bill when it took a 267-pound bear a few years ago. Bill also suggests that given the growing black bear population in Aroostook County, it may be time to reinstate the spring hunt.

In his “Jackman Region” column, Bill Sheldon recommends employing a guide for bear hunting, whether over bait or using hounds. Use of dogs, he says, can “lead hunters on the chase of a lifetime.” Rangeley-region writer William Clunie will be using a guide for his bear hunt this season using hounds, and he describes the relationship between the hunter and the dogs, and tells of the joy he gets from running with the dogs.

And newlywed (sorry, ladies!) Ethan Emerson describes the Byzantine bear-hunting regulations in his home state of New Hampshire, but also shows that he’s figured out the rules (and the bears) by including a photo of himself and a black bear he took during his state’s September bowhunting season a couple of seasons ago.

On the subject of bowhunting, Chris Johnson tells how to successfully use whitetail deer decoys during expanded archery season, which starts September 10. And in a bowhunting special section, Steve Vose reveals that he got his first archery deer after ditching the camo facemask (the eyeholes never lined up when the whitetail walked by) in favor of face paint. Vose also recommends an insulated bib to keep out the cold during long periods on the stand, and a bow-hanger to keep the equipment always at the ready.

This is a fun issue, starting with the letter to the editor from David Jacobs of Phippsburg that’s illustrated by a 1978 photo showing two unusual images – first, the huge size of the 50-pound striper Jacobs reeled in so many years ago; and second, the red-striped shorts he’s wearing that caused his wife to hide the photo in a drawer for the last 38 years.

Joe Saltalamachia’s “Big Game” column will also bring a smile to readers’ faces, as Joe described the healthy tension between himself and Mrs. Saltalamachia, who has put her foot down, restricting additional whitetail mounts on the walls of their living room. Anything that’s not a minimum of 200 pounds and 140 inches, she says, goes on thegarage wall, not in the living room.

King Montgomery writes about service dogs that assist wounded military veterans in this month’s “Sportsman’s Journal,” and David Van Wie teaches us how to get our bird dogs in shape for the upland game season.

Other writers provide the diversity of subject matter that brings readers back month after month, including:

• Tom Seymour overseeing a water test of a “self-inflating” life preserver
• Shane Brown, “Mr. ATV,” teaching us how to be wise consumers when we size up a used machine that’s for sale
• Luke Giampetruzzi taking us fishing in Alaska
• Wes Ashe revealing the best way to catch squid
• Bill Sheldon taking us through the long process of building a beautiful and iconic wooden driftboat, and
• Steve Vose evaluating the AR-15 as a sporting rifle.

All this and much more, to help ease us out of the last of summer, through September and toward next month’s regular whitetail season, when we can head “upta camp” (or upta friends’ camps).

And remember – wherever you go, bring along The Maine Sportsman, so you and your friends can read about all the best the Maine outdoors has to offer!