Subscribe
Home » Blog » The December 2016 Issue of The Maine Sportsman 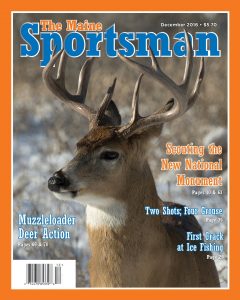 [dropcap]O[/dropcap]n the cover of the December issue of The Maine Sportsman, a buck looks out from a snowy backdrop among the fir trees. It’s enough to accelerate the heartbeat of the December hunter who knows the challenge of muzzleloading – traditional or in-line – as well as the rewards of having a layer of tracking snow on the ground.Our writers understand the excitement of this final stretch of the season, and many of them reveal black powder hunting secrets in their December columns.

Special sections in the December issue include:

·        Two contributions from fisheries biologist Wes Ashe – an ice-fishing story, and a heartfelt and personal tribute to David Boucher, late of Maine’s Department of Inland Fisheries & Wildlife;
·        A piece by JP Falzone on how snowmobilers can avoid trouble with wardens and with landowners;
·        A contributed piece on a productive day afield by bird-hunter and State Representative Ralph Tucker (spoiler alert – the title is “Four Grouse; Two Shots”); and
·        Steve Vose’s effort at a Grand Slam, in which he passed on two small bear and then, as he wondered whether he had made the right decision, a monster bruin appeared at his bait site, only a few feet away.And in a fun read, “New Hampshire” columnist Ethan Emerson steps aside and permits his father – and former Maine Sportsmancolumnist – Brian Emerson to recount the tale of the so-called “Downtown Buck” that led Brian on a merry chase right through a residential area, with the buck going behind houses and through backyards to escape, while Brian – as a passenger in his mother-in-law’s vehicle – followed the big deer’s tracks through town in the snow.

All this, plus great letters from our readers, the monthly ration of jokes, more tales of success by Maine’s youngest hunters and more! So enjoy the last few days of regular firearms hunting, and get your muzzleloader ready for the Monday, November 28 start of the black powder season, which will continue for either one or two weeks, depending on your WMD.

For those with nothing big yet on the game pole – Good luck gettin’ your deer!