Subscribe
Home » Blog » The August 2017 Issue of The Maine Sportsman 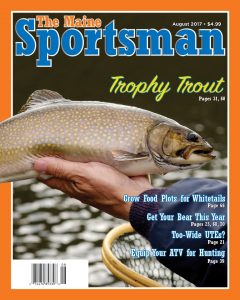 Anglers have to go a bit deeper to find trophy brook trout this month. August’s Maine Sportsman cover photo of a beautiful Pierce Pond brookie, taken by John Ewing, shows that the pursuit is worthwhile. And Bill Graves’ “The County” column reveals how to find the cool, spring-fed tributaries where large trout lie in small pools.

Bear bait can be placed starting July 29, and the general season starts August 28, so this issue fully covers the sport. Steve Vose contributes a thoughtful piece on why hunting over bait, an activity maligned by the anti’s, can actually be considered the most ethical of all method, since the hunter can determine size and gender of the animal before pulling the trigger.

Other black bear coverage is provided by Alyssa Sansoucy (our successful “Young Sportswoman”), and by Val Marquez, who takes note of the growing bear population in Southern Maine.

And this spring, when the Maine government’s ATV program reminded riders of the 60-inch width limit on machines using the state trails, it caused a minor kerfuffle. Our go-to guy on the sport, Shane Brown, contributes a part-account, part rant titled “The Great 60-Inch Width Controversy,” reminding folks that while the limitation is understandable, it’s likely that cooperation among state enforcement agencies and the method of delivering the message to the public could have been accomplished a whole lot more smoothly.

August’s editorial comes out in support of a proposal to require that signatures for any future referendum question (for example, bills to ban bear baiting and hunting with hounds) be gathered from both northern and southern Maine before the vote is put to the public – a constitutional amendment supported by SAM and the Maine Professional Guides Association.

Mount Katahdin is featured this month in two columns – Jim Andrews’ “Self-Propelled Sportsman” describes the joy of a father-daughter climb in “Teens on Katahdin,” while Bill Sheldon climbs the mountain, thankful of his health while waxing eloquent on the differences between then and now, in his “Are We There Yet?” column reminiscing what it was like to be a kid in the back seat of the family station heading – seemingly endlessly – to a Maine destination.

In “Fresh Water Fly Fishing,” William Clunie describes the heavier gear needed to pull in smallmouth bass on a fly rod, while in his “Off-roading” column he tells what accessories should be added to an ATV to turn it into a hunting machine.

Thanks again to our great advertisers – including LL Bean, L.L. Cote (Errol, NH), General Appliance Services, Don Foshay’s vehicle tire and vehicle repair shops, Giguere’s Auction Company, Wildlife Control Company trapping supplies and many, many more – our loyal readers will continue to support your businesses, just as your advertising helps bring our publication by the thousands into homes and onto newsstands each month.

Got something to say? Write a letter to the editor (and send photos, if you have them) to our editor at Will@MaineSportsman.com.

Give us a call at 207-622-4242 – talk with Linda or Chris in the office. Subscribe or renew your subscription, either on the phone or using our new “Subscribe” link at our website, www.MaineSportsman.com. Keep in touch as a Facebook friend.

And thanks again to our informed readers, our many distribution outlets and our loyal advertisers.