Subscribe
Home » Blog » The October 2017 Issue of The Maine Sportsman 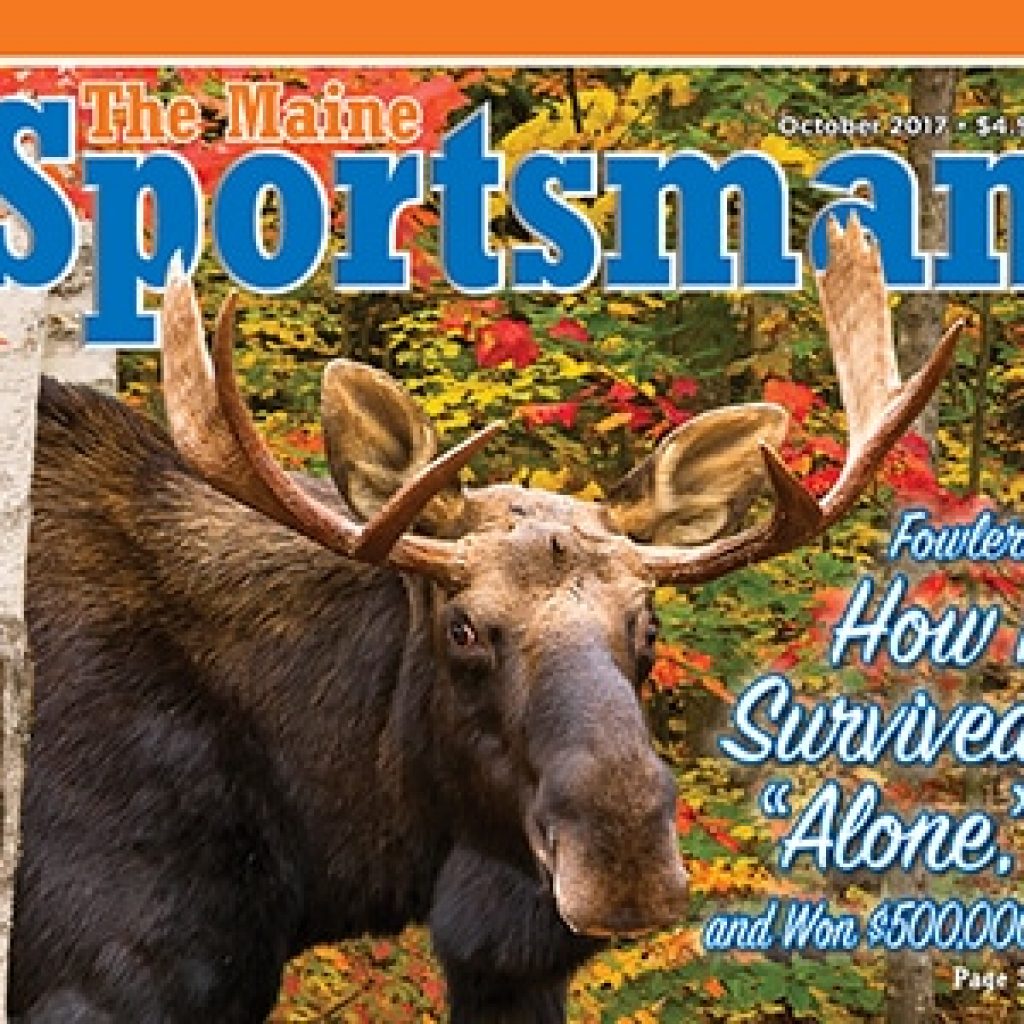 How a Mainer Survived “Alone” and Won $500,000, plus Training a Bird Dog, ATVing, 2018 Snowmobile Preview, Buck-Tracking, the Opinion Poll Results and More! 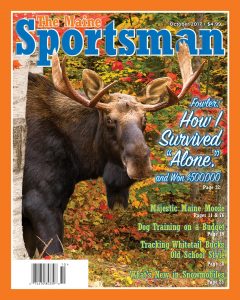 Mainers are known for their toughness and ingenuity. To prevail over nine other contestants in Season 3 of History Channel’s reality survival series Alone, Appleton resident Zachary Fowler displayed both those qualities. Oh, and did we tell you he won $500,000 for his efforts?
Now he tells his saga for the first time, in the pages of the October issue of The Maine Sportsman – how he build a 3-foot long miniature paddle boat, powered by the rubber band from his slingshot.
He planned to use it to catch ducks. The duck idea failed, but the tiny vessel proved aptly suited to troll a fish line and baited hook out into deep water, where the large Patagonia trout swam.
Fowler is already famous, but he’s about to become a household name among the thousands hunters and anglers who may have been too busy in the New England outdoors to watch his success on reality TV.
In addition, we pay tribute to the opening of upland game season, starting with an oft-humorous “sporting dogs” contribution from Michael Browning about training an English Pointer pup while sticking to a strict budget – can you say, “I’d like two quail, please”?
The upland theme continues with King Montgomery’s “Sportsman’s Journal” chronicling the largest-ever gathering of Gordon Setters in Washington County; Joe Salty telling how having a German Shorthaired Pointer puppy has changed his household; and regional grouse and woodcock predictions and tips from all corners of Maine.
Alan Haley returns to the pages of the Sportsman this month, recounting his glory days spent guiding out of Wayne Hockmeyer’s north woods deer camps in the early 1980s, during which a third of all hunters shot a buck. Haley reveals the secrets of tracking big deer in snow – from recognizing the “right” tracks to follow (clue – it’s not just size; rather, it’s the deer’s behavior), to starting off the pursuit at high speed, to keeping your head up and your eyes peeled. His camp photos on pages 29 and 30 alone are worth the price of this entire issue!
Cathy Genthner describes her introduction to the exciting world of ATV ownership in Part 2 of “Getting Into the Sport of ATVing,” while the editorial staff presents a preview of the 2018 snowmobile models – and helps readers determine what types of machines best fit their riding styles.
All this, plus preparing tasty meals with venison brisket and bear meat; the tradition of Parker shotguns, scouting for deer while hunting for bear and grouse; duck hunting on Prestile Stream and much, much more.
Enjoy the start of autumn – the busy season for Maine outdoorsmen and -women!
Got something to say? Join many of your fellow sportsmen by writing a letter to the editor (and sending photos, if you’ve got them) to our managing editor at Will@MaineSportsman.com.
Give us a call at 207-622-4242 – talk with Linda or Chris in the office. Subscribe or renew your subscription, either on the phone or using the “Subscribe” link at our website,www.MaineSportsman.com. Keep in touch as a Facebook friend.
And thanks once again this month to our informed readers, our many distribution outlets and our loyal advertisers.
Next month – Bring on regular firearms deer season!
Will Lund, editor
Will@MaineSportsman.com