Subscribe
Home » Blog » The April 2018 issue of The Maine Sportsman 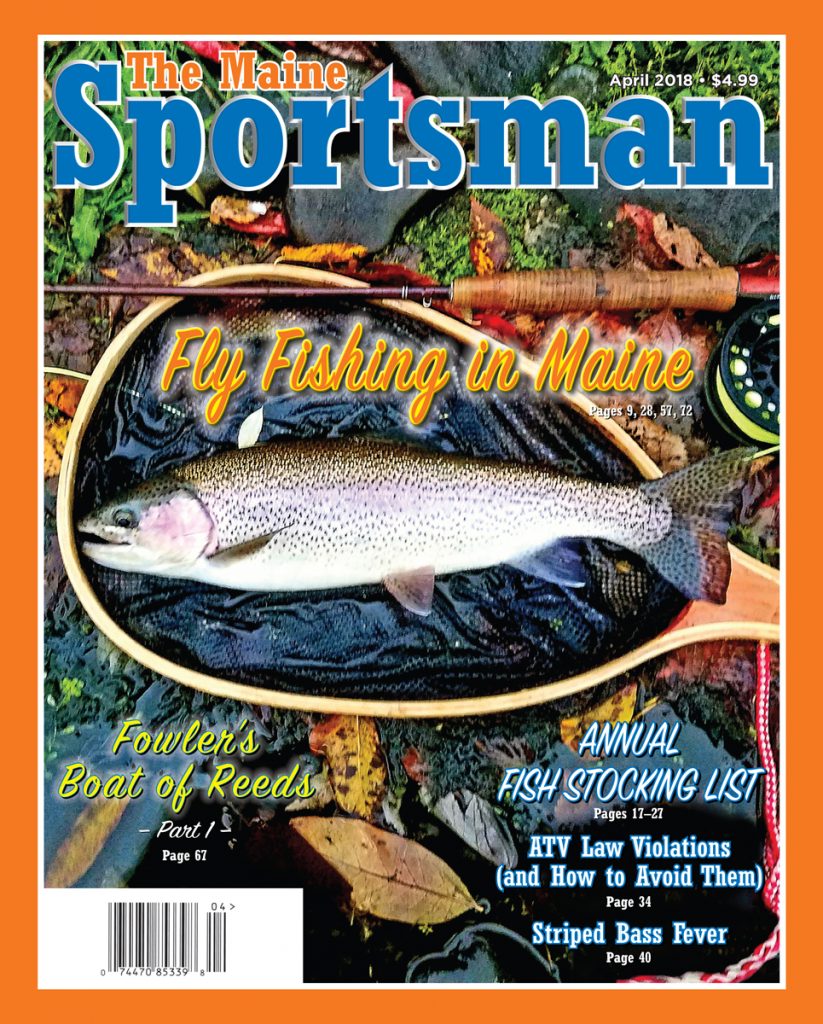 Up-To-Date Stocking List, Fly Fishing, ATVs and a Boat Made of Reeds 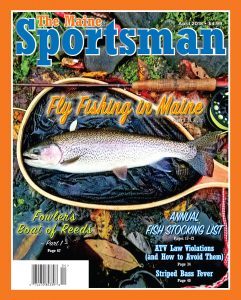 Each year, the Department of Inland Fisheries & Wildlife releases more than a million fish into Maine’s lakes, ponds and streams. And every April, The Maine Sportsman tells you exactly where those fish have been released, in our Maine Fish Stocking Report.
That’s right – eleven pages full of valuable information. Find the county, city or town where the water body you’re interested in is located, and you can see exactly how many brook trout, brown trout, landlocked salmon and rainbow trout were released into that water, and when.
And as Tom Seymour reports in his excellent “Trout Fishing” column this month, if you save the printed list from year to year, you can locate larger, carry-over fish that made it through the previous season and grew larger – even to trophy-size.
And speaking of rainbow trout, that’s a beautiful 18-inch specimen featured on the cover of the April issue – brought to you courtesy of Josh Beane, a Bingham angler and photographer. Josh hooked the lunker while “throwing flies” into the Kennebec, and released the big fish after completing the photo session.
It’s almost ATV season, and this issue brings you a couple of timely pieces – Shane Brown of Bangor Motorsports urges parents to get their kids off the couch and away from their video games by giving them access to – what else? – an ATV, side-by-side, quad-x or dirt bike! And JP Falzone helps us stay on the right side of the wardens in his article, “The Most Common Law Violations for ATV Operators, and How to Avoid Them.”
The April issue also marks the return to our pages of Benny Holloway, a young but experienced salt water fisherman with a particular penchant for stripers. He’s not a doctor, but he plays one this month, with his article “Striped Bass Cures Salt Water Fishing Fever.” And our “Saltwater Fishing” columnist, Barry Gibson, gives readers the cold, hard truth about the upcoming season’s recreational cod and haddock outlook.
Mainers can’t target or keep Atlantic salmon, but our Aroostook County correspondent, Bill Graves, recommends heading across the Canadian border and pulling huge “spring” (or “black”) salmon out of the Restigouche, Miramichi or Matapedia Rivers in New Brunswick and Quebec.
Turkey season starts at the end of April, and Chris Johnson, our “Bowhunting in Maine” columnist, reveals the secrets to bagging your bird with a compound bow and broadhead – and how to make slight modifications to your deer-hunting set-up in order to tune down the speed and power and bring home your turkey.
Steve Vose presents a case for why the hardy brown trout may be the future of Central Maine fishing, given the fish’s adaptability to a wide range of habitat and water temperatures. And in his “Sporting Environment” column, David Van Wie recommends that next time we are walking in a quiet woods, we should stop and look around – then look straight down at the world our feet: the moss, lichens and insects that call the forest floor “home.”
And what issue would be complete without a contribution from Maine’s own Robinson Crusoe, Zachary Fowler. Stymied in his Patagonian efforts to build a boat that would carry him to deep water (the “reeds” along the South American lake sank like stones into the depths), he decided to build a bundled reed boat here in Maine upon his return. Will he be successful? Here’s a clue – Fowler is not one to give up on anything.
So enjoy the April issue! If you’ve got something to say, write our editorial staff a short letter to the editor (providing photos, if you’ve got them), and email everything to Will@MaineSportsman.com.
Give us a call at 207-622-4242 – talk with Linda or Victoria in the office. Subscribe or renew your subscription, either on the phone or using the “Subscribe” link at our website,www.MaineSportsman.com. Keep in touch as a Facebook friend.
And thanks once again this month to our informed readers, to our many distribution outlets and to our loyal advertisers.
Next month – Fowler heads out into icy Penobscot Bay aboard his boat made of bundled reeds; Chris Johnson bowhunts turkeys without a blind; more saltwater fishing and boating coverage; our ATV articles conclude; and we (and our partners at SAM) recover from the March 30 – April 1 State of Maine Sportsman’s Show at the Augusta Civic Center – the “Best One Ever!”
Will Lund, editor
Will@MaineSportsman.com