Subscribe
Home » Blog » The June 2018 Issue of The Maine Sportsman

A Tribute to Lefty Kreh, plus Big Striped Bass in the Shallows, Wild Turkeys in the Field, and Fowler’s Boat on the Rocks 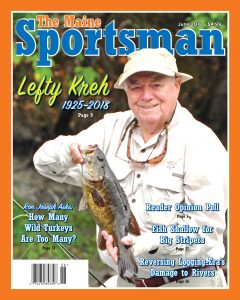 Lefty Kreh, whom Maine Sportsman columnist King Montgomery calls “the best known and respected fly angler in the world,” passed away on March 14, 2018 at the age of 93.
Although his official residence was Maryland, Lefty loved Maine and spent a great deal of time here. He especially enjoyed fly fishing for smallmouth bass on the Androscoggin and Sebasticook Rivers.
In the June issue of The Sportsman, King presents our readers with a pictorial and text tribute to his friend Lefty – the man’s skill, his humor and his overall message of inclusiveness. It’s a fitting send-off to a truly remarkable angler and gentleman.
But as Lefty would have wanted, the sporting life in Maine goes on, starting with the Moose Lottery and Skowhegan’s accompanying town-wide festival at the Fairgrounds June 8 – 10. There will be moose calling (including an effort to set a new Guinness world record for the number of simultaneous callers!), the Axe Women Loggers, monster truck rides and chain saw carving. The Sportsman’s own Kate Krukowski Gooding is helping produce a special (and delicious) event – “wild game and craft beer pairing and tasting” at Constitutional Hall from 5 pm to 8 pm on Friday. And good luck to all in the moose permit drawing!
Do you think you need to go deep to hook big striped bass of the Maine coast? If so, you’ve got another think coming, according to our saltwater expert, guide Capt. Barry Gibson, in his special section “Fish Shallow for Big Stripers.” Look for rocky structure in 3 – 6 feet of water, Gibson advises, since the ebb tide will push tasty edibles such as crabs, baitfish and juvenile lobsters against the underwater ledges, and there you will find big, hungry striped bass.
Re-introducing wild turkeys to Maine was not as easy as you might now assume, especially, according to Ron Joseph in his column titled “How Many Turkeys is Too Much?”, when the cannon-nets used to capture Connecticut birds in the 1980s for transporting to Maine, misfired repeatedly. Eventually the biologists got the nets working, and the results are a boon for hunters and a sometimes-bane for dairy farmers.
Do you need a smile? William Sheldon’s dry wit shows through in his informative writings, including his June “Katahdin Country” column. This month, Bill promises himself that he will stop thinking about hiking portions of the Appalachian Trail, and actually do it. Up until now, he admits, he has been an AT “dreamer.” “Getting into this elite group,” he writes, “requires lots of reading about the trail, talking about it, but never actually lacing up your hiking boots.” That will all change this summer, be promises. We’ll check back in September, Bill!
And finally, not satisfied to paddle his boat-made-of-reeds around icy Camden Harbor this past winter, guest columnist Zachary Fowler (he of “Alone” survival show victory) pushed off from the frothy banks of the Passagassawakeag River in Waldo this spring, in the annual 7-mile whitewater competition. Part One of that fateful trip is found this month, in a piece titled “Fowler Gets a Sinking Feeling.” Suffice it to say, just when Fowler felt he was “hitting his stride,” his fragile craft was headed for a sharp rock in the channel.
All this and much, much more, including restoring natural obstructions in rivers for better angling, Zen and the art of bicycling, good old-fashioned fishing with worms, a new lever-action rifle from Henry and an instant-classic photo of big, strong Tom Roth as a 20-month old in a striped, oversized life jacket holding his first of a lifetime of fish.
So please enjoy the June issue as much as our writers and editorial staff enjoyed assembling it! If you’ve got something to say, write us a short letter to the editor (providing photos, if you’ve got them), and email everything to Will@MaineSportsman.com.
Give us a call at 207-622-4242 – talk with Linda or Victoria in the office. Subscribe or renew your subscription, either on the phone or using the “Subscribe” link at our website, www.MaineSportsman.com. Keep in touch as a Facebook friend.
And thanks once again this month to our informed readers, to our many distribution outlets and to our loyal advertisers.
Next month – Fowler’s reed boat wraps around the rocks; getting your salt-water fishing boat ready for the season; becoming an ATV advocate; plus jokes, the Almanac and more to take you through the warmth of July.
Summer’s here and the time is now – for outdoor sports in Maine!
Will Lund, editor
Will@MaineSportsman.com