Subscribe
Home » Blog » The April 2019 Issue of The Maine Sportsman 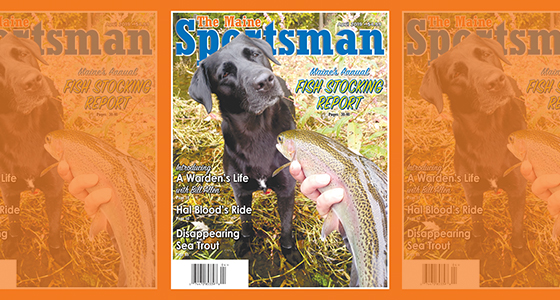 A Rainbow Trout, a Labrador Retriever Good-Luck Charm, and the Annual Fish Stocking List – Oh My!

While the staff and writers at The Maine Sportsman magazine recover from the 39th Annual State of Maine Sportsman’s Show, we entrust into your worthy hands the April issue of our publication. Let’s start with the cover POV photo of a huge Upper Kennebec River rainbow trout, and a gorgeous black lab named Neena. “She’s my fishing buddy and good-luck charm,” reveals photographer Josh Beane.

Inside the issue’s pages are some standby features – the much-anticipated 10-page fish stocking report, current through March – and some new attractions, including our first column by retired Warden Lieutenant Bill Allen, titled “A Warden’s Life.

Let’s start with the stocking list – more than 1,800 individual listings of lakes, ponds, streams and rivers, grouped by county, showing exactly where and when tens of thousands of brook trout, landlock salmon, splake, brown trout and rainbow trout have been placed by the hard-working biologists at the Department of Inland Fisheries & Wildlife. And almost as if we’d planned it, immediately following the list is Lou Zambello’s “Freshwater Fly Fishing” column, appropriately titled “Fooling Newly Stocked Trout Requires Different Tactics.” We love it when a plan comes together!

Now back to our new writers – Bill Allen weighs in with his inaugural column, titled “Wescogis Night Hunter.” When it comes to poachers, Bill knows of what he speaks, having been a member of the Maine Warden Service for 33 years before his retirement in 2005.

Another new writer, David Putnam, is currently a resident of Waldo, Maine. Where’s Waldo, you ask? Well, for one thing, it’s a long way from Florida, where Putnam honed his skills writing for such publications as the Florida Sportsman. But we’ve got him now, and he shares his wealth of boating knowledge in an informative yet lighthearted special section titled “Boat Trailering Made Easy.”

The special section offerings are rounded out by Steve Vose’s ATV piece, “Preventing and Repairing Flat Tires on your ATV” (based on his personal experience), and Barry Gibson’s “Saltwater Fishing” article, a respectful but forceful tirade titled “Feds Blame Shutdown for Delay in Groundfish Rules.”

Inside, well-presented stories, illustration and articles follow one after another:

The balance of the 80-page magazine (the most pages of any sporting magazine in Maine!) contains the columns, stories and photos you know and love, featuring trucks, antlers, Big Woods Bucks, snowmobiles, trout, salmon and Northern pike – and our world-famous, oft-retold jokes and cartoons.

For readers in grades 6 – 12, you’ve got about a month (deadline – May 15) to submit your written essay or non-fiction story in our first annual Maine Sportsman’s Youth Writing Contest, featuring four cash prizes of $100 each. Click here for details, and email the editor with any questions.

So we hope you enjoy reading the April issue as much as our columnists and editorial staff enjoyed assembling it.

Give us a call at 207-622-4242, and talk with office manager, Linda. Subscribe or renew your subscription, either on the phone or using the “Subscribe” link at our website, www.MaineSportsman.com. Keep in touch as a Facebook friend.