Subscribe
Home » Blog » The August 2019 Issue of The Maine Sportsman 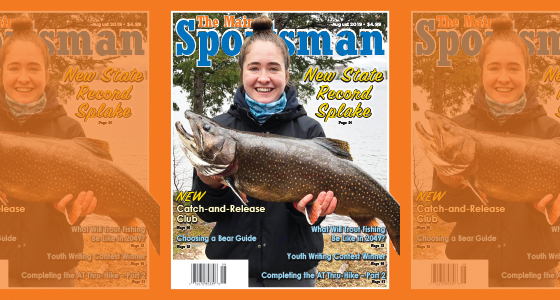 Ciera Hamlin thought she’d hooked a rock – but then the rock began to move. Twenty minutes later, up from the depths of Frost Pond near Magalloway came a lunker splake – 11.38 pounds and 29 inches of Maine record-breaking fish.

We’ve got proud Ciera’s photo on the cover of our August issue, while Joe Saltalamachia details her story in his “Big Game” column that features – for the first time – a trophy fish instead of Joe’s usual subject matter of moose, bear and whitetail deer.

Inside the issue, we celebrate a different type of fishing experience, as we unveil the Maine Sportsman “Catch-and-Release Club,” designed for those anglers who land – and then release – a trophy fish. We received encouragement for this program from kayak-angler Sam Cushing, who will be awarded Patch #1 for a 22.25-inch largemouth bass caught this year. In addition, we benefitted from the technical expertise of fisheries biologist Wes Ashe, who translated current “One that Didn’t Get Away” fish weights into fish-inches that can be measured and photographed before a fish is released.

The end result? A program that will award lucky and skilled catch-and-release anglers with a newly-designed patch, and the knowledge that they have excelled at their sport while still

Other highlights from the August issue include:
·        Ron Joseph’s guest “Jottings” column on the under-appreciated brook trout
·        George Smith telling true tales from his life afield that will bring a smile to your face
·        A bear-hunting special by pistol-shooter Bill Graves
·        A sporting dog feature by wing-shooting specialist Michael Browning, and
·        William Clunie’s “Off-Road Traveler” column revealing Tom Roth’s favorite vehicles, including the first time a photo of a 1964 Pontiac GTO has ever been featured in the pages of The Sportsman.

Again this month we continue celebrating the winners of the First Annual MaineSportsman Youth Writing Contest. This issue features the work of Vermont 11th grader Isabella “Bella” Milazzo. Bella was taught how to hunt by her grandfather, and when he passed away after being selected for a moose permit last year, the state gave his permit to Bella. Her experiences on that hunt, and the skill with which she expresses herself in words on our pages, will impress readers (see “A Hunter’s Lottery,” page 50).

All this and a great deal more, including joining our favorite Warden (Lt. Bill Allen (Ret.) in his pursuit of night hunters; Tom Seymour and Lou Zambello in their pursuit of trout; a tasty garlic-rosemary duck recipe from Kate Krukowski Gooding; Jim Andrews’ tribute to Gardner Defoe’s legacy; and David Van Wie looking 30 years into the future, while Ethan Emerson and Bill Pierce look back into Maine history 100 years or more.

So we hope you enjoy reading the August issue as much as our columnists and editorial staff enjoyed assembling it.

Give us a call at 207-622-4242, and talk with office manager, Linda. Look for us in your local store. Subscribe or renew your subscription, either on the phone or using the “Subscribe” link at our website,www.MaineSportsman.com. Keep in touch as a Facebook friend.
And thanks once again this month to our informed readers, to our many distribution outlets and to our loyal advertisers.
Will Lund, editor
Will@MaineSportsman.com
Augusta, Maine