Subscribe
Home » Blog » The September 2019 Issue of The Maine Sportsman 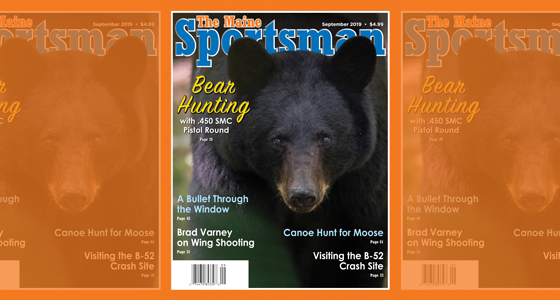 The massive head of a black bear stares out from the cover of the September, 2019 issue of The Maine Sportsman. Bears are big – the current state record, shot in Greenville in 2012, weighed nearly 700 pounds!

Maine’s 3-month season is already underway – Youth Bear Day was August 24; hunting over bait started August 26 and runs through September 21; hunting with dogs is legal from September 9 through November 1; and the general firearms season lasts until November 30.

Western Maine Mountains columnist William Clunie has a goal – to take a big black bear with a handgun. But not just any handgun – William wants to use a .45 caliber model 1911, loaded with a special ammo – .450 SMC, which packs a big punch yet fits neatly in any heavy-duty pistol chambered for .45 ACP cartridges.

And if you believe bear are found just in northern and western Maine, enlighten yourself with Tom Seymour’s special section, titled “Yes, Virginia – There are Bears in the Midcoast Region.”

Whether you use .450 SMC, 30-30, .308 or any another caliber, it’s important to know what’s behind your target. In a true, still-developing story from a central Maine town, a homeowner – the mother in a family whose members hunt every fall – tells what happened when they returned to their house from a Thanksgiving, 2018 feast and discovered that a hunter’s slug had shattered a bedroom window, and the efficient Maine Warden Service investigation that followed, in “A Thanksgiving Day Bullet Through the Window.”

The balance of the 84 pages (the most of any New England hunting and fishing magazine!) contains the quality writing and photography to which our loyal readers have become accustomed, from King Montgomery’s report on The Landing School in Kennebunkport, to Barry Gibson’s update on Maine’s misunderstood saltwater cusk, to the latest Youth Writing Contest winner, Delaney Woods, who is in the 9th grade at Dirigo High School, to Hal Blood’s “Big Woods” whitetail tracking submission for the month, “The Wind Can Be Your Friend,” and retired Lt. Warden Bill Allen’s lasted tale in which the good guys win and (spoiler alert!) the poachers lose.

We hope you enjoy reading the September issue as much as our columnists and editorial staff enjoyed assembling it.

Give us a call at 207-622-4242, and talk with office manager, Linda. Look for us in your local store. Subscribe or renew your subscription, either on the phone or by clicking here to subscribe on our website. Keep in touch as a Facebook friend.